A downloadable game for Windows and Linux

This is a fan-made game. All characters depicted belong to their respective creators.

Check out the Newgrounds Page for the original web browser version

Drive back evil robotic versions of several NG characters as your own NG icon. Stylishly dance through them as Cassette Girl, shoot them with Hank's personal arsenal, unleash Girlfriend's inner demon, and so much more in this tough-as-nails action game

What started as a simple character update to our 2020 Pico Day submission evolved into several massive updates. One new character became two, and then two eventually became six with revamped gameplay, assists, vehicles, and enemies. All of this is done as a loving tribute to Newgrounds. There's still so much more we can represent. 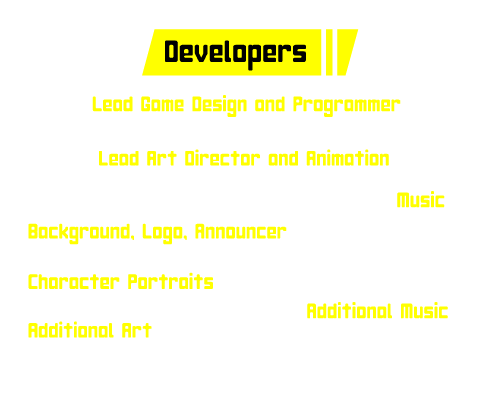 CHECK OUT THE GALLERY FOR MORE CREDITS.

Most of the sounds came from here and here.

Special thanks to Jack for helping me with the cloud saves.

Want more levels, assists, adversaries, or playable characters? Express your support by suggesting them in the comments and sharing the game.

holy cow this is sooo cool

I have some character ideas for you!.The game is really funny so why can't I put my ideas in it?

P-Bot:He can be a tank-type of character.He is really stronger,but have less life than the average characters.I don't think he can fit as a normal character,he can be a trophy for beating certain amount of enemies or whatever your mind can think about lol.

Samurai A'shole:His katana and his speed together are really dangerous,but that doesn't matter because he is a samurai...actually,that don't make sense.

Tankman:The though guy and the ''''captain''''.Let's be honest,this guy will appear soon in the game,I know you're thinking on it xD.His average moves can be using fists and a Uzi,but I don't know if that's too OP or idk.

Convict:Another trophy character,but with a more harder way to unlock(I guess,unlocking first S.A. and after him doing the proccedure to unlock this guy).He is too OP,so I think I will not count his mimic powers 'cuz that will break the game xD.And I don't think the artist could handle drawing Convict versions of every character,so he will be though but in the normal way:only using a knife and his fists.

Mime and Dash:Can be joke character,but think about the possibilities lmao.

Henry Stickmin:This could be impossible,but if it happens,I love to see a moveset of him using a trap from every game.

Well,if u want to add someone from the list I'm all for it :D
Also good luck with the development!

Thanks for the character post! I love your ideas for each character. We'll see if they come in the future :)

You're welcome buddy,always open to help this kind of cool projects!

Also I had a idea for a minigame mode,where u have to make some challenges to unlock characters or new scenarios.Also,if you're looking to translate the game in spanish,I will help translating it.I'm spanish lmao

this game is honestly sick!, i already have played the newgrounds version and this one, i really wanna see more of this game since its so unique and sick!, i also had some ideas i wanted to share! (i know alot of people already have done so and im sorry if its annoying to you!)

So i had an idea for a new mode, in this mode 1 player would be any of the playable characters, meanwhile the 2nd player would be able to control enemies, since enemies can die pretty quickly the 2nd player would be assigned a random enemy each time he dies, if there isnt any enemy in screen a random enemy will just pop up, he wouldnt be assigned the bosses since that would be too op, since most enemys have like 1 or 2 attacks the controls would be the same except you wouldnt be able to dodge, double jump or use a vehicle, they also woudnt be able to attack any enemies since that would just be helping the other player.

i know it would be probably really hard to add this to the game but i still just wanted to share my idea!

It's not a bother and I encourage these types of posts. I try my best to read everything since it helps me brainstorm more stuff.

I had a similar idea also where p1 and p2 take turns on rounds and try to score more points than the other person. The kick for this one is that the player not currently playing would be a flying thing (idk a ghost or machine thing) and can shoot, spawn enemies, or drop traps that might mess up the player currently playing.

I do like your idea also and I might experiment with both to see which clicks more.

Made a video for insane mode

Will there be a mac build soon?

Maybe when I release the other characters, I'll probably get my hands on a Mac by then. Try playing the web version on the original Newgrounds page while you wait.

Ah ok. I'm willing to wait as long as it takes for the release. No need to rush anything. Take care

okok i wrote an ena moveset concept because i really like her and this game and wanna see her in it !!!! hopefully its up to standard

Attack 1 - Abstraction - Ena attacks by swinging her arms in front of her. (idk how to describe this best but basically its like her arms are detached from her torso and they just swing from side to side in order to punch without the rest of her body having to move, kind of like if the arms were  a steering wheel)

Attack 2 - Outburst - Ena performs a different attack depending on her active emotion.

Special - Emotional Control - Ena swaps emotions, from Happy to Sad. This slightly changes her appearance, second attack, and some properties. Each emotion lasts for a short amount of time before making her neutral again. Killing an enemy refreshes the skill, allowing emotions to be swapped prematurely. Upon spawning in, the emotion Ena will use on her first cast of this skill will be Happy.

Rush - The Great Runas - Moony will float down and start to accompany Ena. Every so often, Moony will go into a more humanoid form and shed her spherical shape. When this happens, she will automatically track onto the enemy with the highest HP, and begin to attack them. Her first strike leaves the enemy vulnerable. Ena can attack in tandem with Moony when this happens!

In addition to this, Ena's emotions are intensified during her Rush. Happy becomes Drunk and Sad becomes Full-Sadness, increasing Attack 2's damage and increasing the effectiveness of each emotion's positive effects.

Love how detailed this all was! You seem to have a great grasp on how we design our characters. Also love the other features you suggested. I'll be looking back on this occasionally LOL

That character design was incredibly well made. However, I can't tell you if Ena will come to the game :)

I'm sorry about that :(. I'm not sure why that's happening. If there's a crash error please send me a picture of what is says. I'll look more into it.

Just finished watching. You guys did great! Thanks for playing!

Happy you enjoyed the video and we really enjoyed playing it so thank you for making it.

Pretty hard with keyboard, but the controls are the same (I dont think ima change them anytime soon, maybe one day) as other games like these. Game lived well with the hype the trailer gave. 10/10 bro :D

I dont know how to play 2P,(if there is any) with a controller and a keyboard. could you help me?

Man, Tails, Sonic or Knuckles would be so hype in this. Also, is multiplayer coming anything soon? (Like online multiplayer)

Been studying on how to make online games. So its not planned right now but if you want to play with friends online try using https://parsec.app/  . It streams the game to your friends anywhere.

Soild Game Keep Up The Good Work (4P Multiplayer when??

Thanks! 4p not planned anytime soon, but maybe in the future :)

this is so freaking fun and awesome, im nothing short of addicted .. nene's been my favorite to play so far, with darnell gf and hank in a close second

is there a discord server or something similar for the game? id love to make suggestions and such for it , this game is so cool AGAGHHHHH

I haven't made an official discord for the game right now. You can post here, the original Newgrounds page, or the youtube gameplay release trailer. We look at all of them :)

This game is fantastic. So addicting I can't stop playing.

it's just a divine game, very fun, dynamic. I enjoyed my time in it. Excellent game!